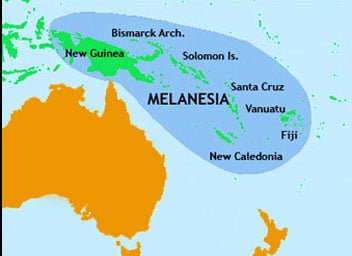 New Caledonia was first settled by the agricultural and seafaring Lapita people who were there as far back as 1350 BC. The Lapita are thought to be relatives of modern day Polynesians, Melanesians and Micronesians. The archaeological culture and its characteristic geometric dentate-stamped pottery are named after the type site where it was first uncovered in the Foué peninsula on Grande Terre, the main island of New Caledonia.
The indigenous Melanesian peoples of New Caledonia, “The Kanaks” have inhabited the islands for about 6,000 years, living in autonomous tribal groups in the narrow valleys between the mountains. Kanak society is organised around clans, which are both social and spatial units. The clan could initially be made up of people related through a common ancestor, comprising several families. There can be between fifty and several hundred people in a clan.
The British first sighted New Caledonia on September 1774, during the second voyage of Captain James Cook. It is suggested he named the territory New Caledonia, as the north-east of the island reminded him of Scotland. Caledonia was the old Roman name for the highlands. The west coast of Grande Terre was approached by Jean-François de Galaup, Comte de Lapérouse in 1788, and the Loyalty Islands were first visited in 1796. For the next 50 years little interest or contact was made with this archipelago.
Contact became more frequent after 1840. This was fuelled by China’s need to have a supply of sandalwood for their incenses. Santalum austrocaledonicum, New Caldedonia Sandalwood, is a sandalwood tree from the family Santalaceae which covered the archipelago. During the 1840s, Sandalwood traders and whalers from Britain and North America came to New Caledonia and began taking wood, both of S. austrocaledonicum and various trees of the genus Agathis, off the islands. The sandalwood trade ceased in approx 1868 when the logging had exhausted the supply of trees. Slavery replaced the sandalwood trade around 1842 and continued until 1904. People, mainly men, from New Caledonia, the Loyalty Islands, and other South Pacific islands were kidnapped or tricked into working as slaves, mainly on the sugar plantations of Queensland, Australia.
In the early 1850s, with fewer South Pacific islands for Britain and France to choose from, there was growing concern in France that Britain would take possession of New Caledonia. The French were looking for a strategic military location, as well as an alternative penal settlement to Devil’s Island, off French Guyana in South America. In 1853, Napoleon III ordered the annexation of New Caledonia. Britain did not react because it was preoccupied with its newest acquisitions, New Zealand and Australia. New Caledonia served as a French penal colony and was ruled by military administration.
From 1863-1897 over 21,000 French convicts were sent to New Caledonia, their main destination being Ile Nou. 4000 political convicts were also sent to New Caledonia from the Paris Commune. The vast amount of convicts proved very helpful to local administration. Ahrens, P describes the usefulness of the convicts to public works in her article “Souvenirs du Bagne: Shell art from New Caledonia. Convicts constructed churches and cathedrals, assisted with railway construction, made brinks and worked in the local copper mines. Moving on from their involvement in public works the convicts prison authorities began to supply items made by convicts to the local markets. Furniture, baskets and trays as well as engraved mother of pearl shells appeared in the local bazaar and were sanctioned by the authorities. The authorities recognising that some of the convicts were highly skilled and were previously goldsmiths and cameo artists from Paris. 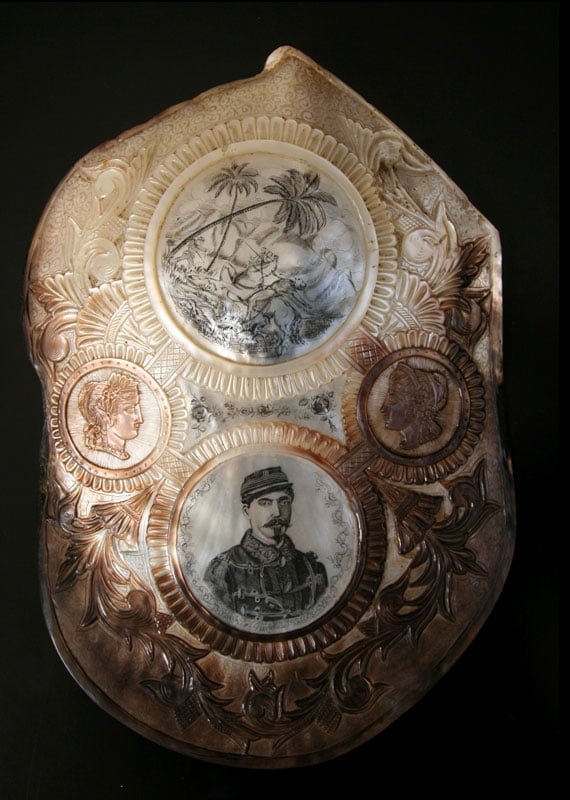 This engraved mother of pearl is a fine example of this French Convict art period. It highlights Colonel Gally Passebose. Passebose, Commandant Militaire died 3rd July 1878 when trying to suppress a native insurrection in Ourail and Boularpar regions of New Caledonia. Passebose was the youngest Colonel in the French service and was soon to return to France to become a General before his untimely death. Interestingly he had risen to the status of Colonel from the rank of a common soldier
On one side of the shell are two circular medallions. The top scene depicting the possible battle that Passebose encountered with the local insurrection and the bottom medallion a portrait of Passebose in military uniform. At the side of the 2 main medallions are 2 smaller circular medallions depicting refined ladies in contrast to the image of the insurrection. Floral patterns wrap around the shell and medallions, drawing your eye to the key images.
On the other side of this piece is an engraved scene of an angel with broken ankle and wrist chains. The angel is holding a torch, symbolising the light in the dark to all who need it. The angel is standing on top of a head of a man who skull represents the common world. His moustache transforms into wild roses that wrap around the image. Dr Prue Aherns from Griffith University in Australia, a world leading expert in this field describes in her recent article in The Oceanic Art Society Journal, the spiritual or religious iconography used by the convicts, “Pious scenes which promised redemption were popular during this time. Scenes offered a spiritual escape from their current incarcerated position.” There is a signature on the bottom of this image. Other examples of this fine craft by French Convicts using mother of pearl shells are shown here. 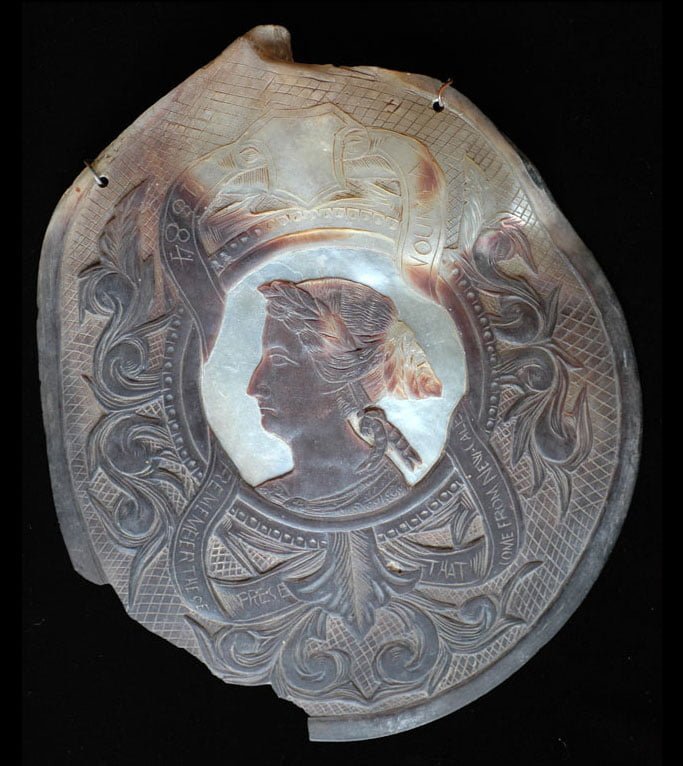 Ahrens, P also describes that whilst mother of pearl was the object of choice for the penal craftsman, decorated coconut’s or objects made from coconuts were sometimes used. 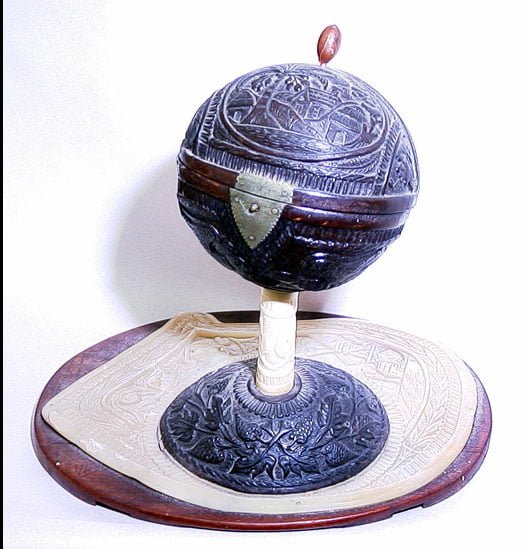